“If we make a film program, renting short films is more expensive. For a program composed of ten films of ten minutes each, the invoice will prove to be a bit more expensive, but the spectator, watching the program in its entirety, is likely to feel that she/he has watched a much longer program, having seen so many different things – especially if the program is composed of a wide range of films.” 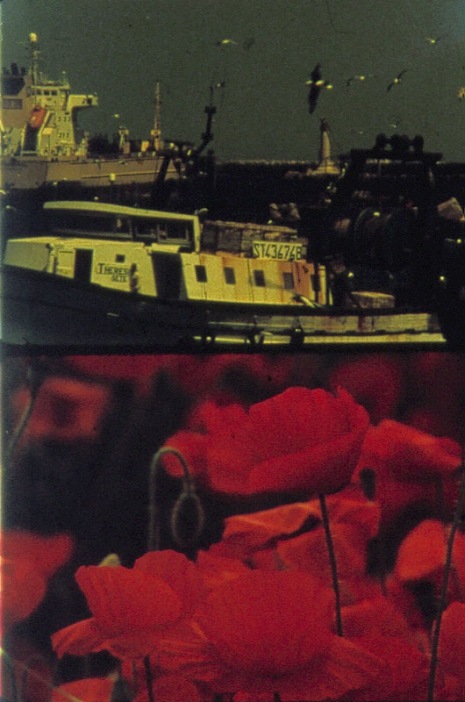 Rose Lowder’s filmmaking practice is based on a suspicion: pondering on the common assertion that film runs at the speed of 24 frames per second, she noticed that, on the screen, each image doesn’t seem to last the same amount of time. The size is identical, but, in its succession, the resulting image is a composite one. Before owning a camera, Lowder dedicated her time to the study of perception processes, making films with clear leader, a paper perforator and permanent markers. What was the right interval between two frames in order for the eye to compose one single image with two motifs? By way of stimulating certain receptors, two distinct images could be perceived simultaneously. Between the reality of the film strip and the natural quality of the perceived image during the projection, between the images perceived on both surfaces, Lowder discovered an infinite space where she could manipulate optical subtleties created by the enjambment of the images during the screening.

Later, the Bolex 16mm camera allowed Lowder to shoot frame by frame, emulsifying alternate frames, thus leaving some unexposed. By rewinding the film in the camera, she exposed a second time the frames that she had previously exposed, in such a way that the intertwining of frames generated a superimposition that appeared only on the screen. Again, the perceptive system was based on the overlap of the stimuli. Lowder compared her working method to that of pointillist painters, when they placed a red flower next to a green object in order to enhance the consistence of colours, to make them more vibrant. Just like the coloured flowers that Lowder recorded in each frame, in those paintings the coloured strokes were not superimposed but stood side by side on the painting. In the same way, the filmmaker exposed frames, skipped others, rewinded and created double exposures with previously unexposed frames. On the film strip, we see the red flower along with the yellow and the blue one; on the screen, we see a bouquet of flowers, the colours being perceived simultaneously. The film is exposed in the same way a piece of fabric is woven, by recording the images in various orders and places, and moving forwards and backwards. 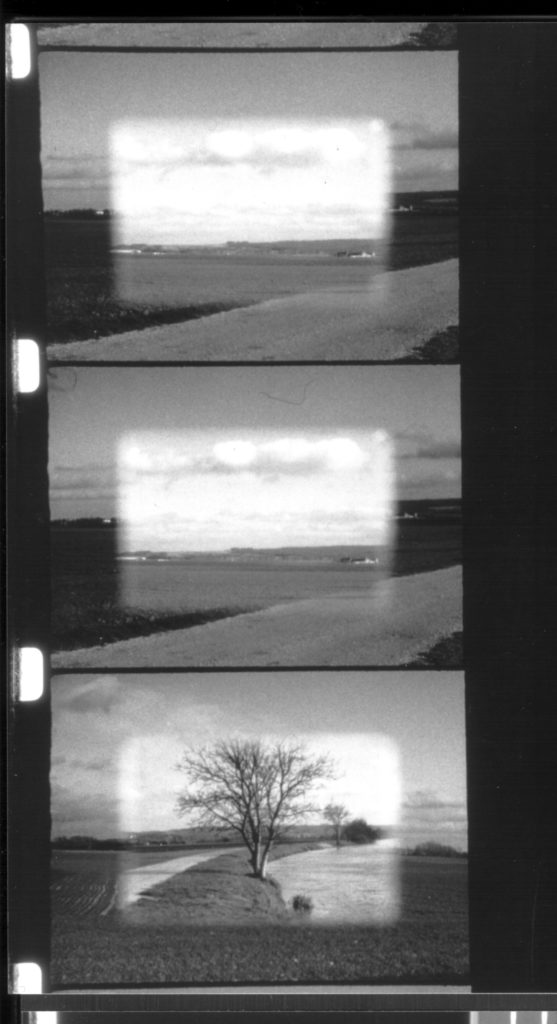 Complete film rolls ran more than once in Scott Hammen’s Bolex as well. Two similar shots show two adjacent fields – in one the crop is more advanced than in the other. By stimulating some receptors (like the privileged presence of the lines, or the forms and the colours) it is possible to intervene within our perceptive system and get it accustomed to the next 24 still images to come, which are closer in time and in space. It is precisely this act of interlacing that allows the unification of two images for the perceptive system, be it recorded in the same place in different time periods – like in Lowder’s films – or at the same time – in Hammen’s landscape films. Sometimes cinema can show us the same point of view recorded in different time periods, like in Rose Lowder’s work (blooming, foliation, fruition) or, through patient attention to the observable natural phenomena (wind, light changes, weather), it can reveal an underlying structure in the chronology and the passing of seasons, or determine the order of the sequences (as in those études en plein air by Corot, to whom Hammen feels so close). As though they were applying brush strokes on a particular portion of the canvas, both filmmakers edit their films in-camera during the shooting itself. The rhythmic punctuation created by the return of the same images in their different takes, or the alternation of the 24 fps speed with other speeds (Lowder), or the creation of layers from multiple shots of the horizon (Hammen) are modulations that are not composed prior to the shooting of the film.

Nevertheless, the working methods and processes of both filmmakers are thoroughly different. Hammen’s practice was based on looking at the processed film, keeping what was interesting to him and filming again, without taking any kind of notes. His films are successions of sequences, separated by black leader, short blinks that clear the viewer’s sight. The use of multiple exposure is only a very small part of Hammen’s technique. Hammen used to go out to film bringing along a suitcase full of objects, dreaming of Charles-François Daubigny’s bateau-atelier, a floating workshop. Besides colour filters, the use of of black cardboard pieces allowed him to mask parts of the frame and to combine them with frames and borders of various colours. The shorter the focal length and the higher the f-stop (the aperture), the greater the depth of field and the detail of the borders between the masks. In other occasions, Hammen used supplementary masks – one of these consisted in a black rectangle surrounded by a transparent one; another one was a small transparent frame surrounded by a black one. By filming the takes with a wide focal length and strong solar light, Hammen obtained very different results with his cardboard masks than the ones he had achieved with mirrors. The mirrors had allowed him to see the effects in real time through the camera viewer. This gave him the chance to work with only one exposure (should he manage to obtain the reflection of the main image), thus avoiding the juxtaposition of images filmed in different moments, which is what happens with the cardboard masks.

In his series dedicated to the Sainte-Victoire mountain, Cézanne rendered the real perceptions of the mountain – both its relief and its varied mass. Talking about Rose Lowder’s cinema, Laure Bergala evoked the “plots” that compose all the different facets of a mountain at the same time.Lowder reached the conclusion that the smallest unity in the practice of filmmaking is not the shot, and not even the single frame, as Peter Kubelka once said, but the fragments of each frame that could compose what we see on the screen. It’s the meticulous exploration of the Bolex that allowed Lowder to understand that what we call reality is in fact much more interesting projected on a screen than perceived by the naked eye.

Even if Lowder used to weave her films frame by frame, on other occasions she also exposed the roll continuously. By only changing the framing and the focal point, she avoided filming both descriptive and abstract shots in filming a river’s waterfall or a small pond inhabited by turtles. These works on “observed reality” – or its agreed upon appearance – are the result of the extreme concentration necessary to the configuration of the images that were forming during the transformation of the motifs, chosen according to the probable evolution of its parameters.

Just like the type of emulsion chosen in accordance with its sensibility will determine the graphical qualities,  the roughness of the textures, the definition of the shapes, the volumetric components, the size of the grain or the recording and interaction possibilities (Hammen used to shoot his landscape films with a 25 ASA Kodachrome film, which allowed him to overexpose or underexpose the bright yellow colza, the dark line of trees in the background or the deep blue, saturated sky as he liked), Lowder knew that the precise selection of the focal point for each image would not only generate a change to a new “plot of the real”, but also a new framing. And that’s how Lowder, in these films shot in continuity, chooses a type of focal point just for one frame then the next focal point for various images, or returns to one that was already used, but for a different number of frames, thus modifying the composition perceived on the screen.

Unlike our eyes, Lowder says, the camera only has one eye: reducing this difference is, therefore, necessary.

Montage of notes elaborated from various statements by Rose Lowder and Scott Hammen: